As pandemic lifts, COVID relief programs may have unequal effects

The number of lives lost per day has dropped to single digits on average in well over half the states and has hit...
View Post
Top News

Her hope could presage improved lives for millions of lower-income workers as vaccinations become widespread and the economy restarts.

But massive federal relief programs are slated to expire by autumn and there are fears that many Americans could end up in even worse shape while those at the upper end of the income spectrum thrive.

Inequality was rising even before the pandemic. It could accelerate again after a year of job losses skewed toward low-income workers, big gains in stock markets and a widening disparity between homeowners and renters.

Before COVID-19, the gap between the bottom and top rungs of the economic ladder grew over many years. Between 1979 and 2015, the top 1% saw its income grow 229% in the U.S., according to the Economic Policy Institute. Income for the bottom 90% increased 46%. Federal tax cuts in 2017 disproportionately benefited the wealthy.

As the coronavirus triggered shutdowns of businesses and fear among consumers, tens of millions of jobs were lost all at once, the lion’s share of them modestly paid service positions that depended on in-person transactions.

Yet inequality by some measures did not surge.

The share of wealth among the poorer half of the U.S. population actually grew to 2% in the fourth quarter of 2020 from 1.8% a year earlier, evidence that some of the more generous federal aid benefits went to savings, according to data compiled by the Federal Reserve.

The $2.1 trillion CARES Act in March of 2020, the $900 billion Consolidated Appropriations Act in December and last month’s $1.9 trillion American Rescue Plan Act hiked jobless benefits and sent out stimulus checks, among other measures. Combined with a moratorium on most evictions, the government help prevented many jobless from plunging into hunger and homelessness.

But now what? With vaccines being rolled out and more companies hiring again, will the economy rise robustly enough to lift jobless Americans as pandemic benefits expire?

History is not encouraging. The Great Recession in 2008 was devastating for many households and a large federal stimulus package spurred only modest growth. Meanwhile, inequality continued to grow.

“If you look at the last 100 years, we were already at peak inequality between the wealthy and the poor and then the pandemic started disproportionately hitting the poor,” said Caroline Fohlin, professor of economics at Emory University. “The impact was not equally shared.”

But the size of the federal response was much larger this time, so there is hope that it not only kept inequality at bay, but set the stage for a worker-friendly recovery, said Heather Boushey, a member of President Joe Biden’s Council of Economic Advisors.

“We should be able to get back to a pre-pandemic unemployment rate by the end of the year,” she told reporters last month. “Coming out of this, I think we will see a decline in inequality.”

Much of the American Rescue Plan Act is targeted at children, especially those in families with low incomes. Experts estimate that the tax credits and other support for parents could cut child poverty in half.

While not directly responding to a question about inequality, a spokeswoman for Georgia Gov. Brian Kemp said the state will help those hardest hit by the pandemic and that a healthy economy is good for all.

“As more Georgians get vaccinated, we look forward to seeing the economy continue to rebound and for more Georgians to be able to return to normal,” said Mallory Blount, the spokeswoman.

Yet some critics warn that the magnitude of the government’s aid itself may keep inequality high.

The massive payments did ease hardship, but will give some people an incentive to stay out of work, said Angela Rachidi, a poverty scholar at the right-leaning American Enterprise Institute, in recent testimony to the U.S. Senate. “These short-term gains will mask long-term negative consequences that will be difficult to reverse.”

And there are some signs already of a widening gap. A Gallup survey published this month showed most complaints about deteriorating job quality coming from lower-income workers. At the same time, the sources of wealth for upper-income Americans has soared.

Over the past 12 months, the S&P 500 index has risen nearly 50%, benefiting those who had savings to put into stocks. A Forbes report on super-wealth this past week showed billionaires getting 64% richer last year.

The value of homes is also a key source of wealth to many Americans, and the vast majority of homeowners did not lose jobs during the pandemic. In metro Atlanta, home prices rose an average of 9.6% in the past 12 months, according to Re/Max. That’s equity that can be used to take out new loans and spend on other things.

In contrast, lower-income workers are typically renters, and about 1.8 million households in March were significantly behind on rent nationally, owing an average of $6,100 each, according to a study by the Federal Reserve Bank of Philadelphia.

The current national eviction ban is not complete. And it expires in June. Meanwhile, past-due rents have continued to pile up for many, forcing a reckoning at some point.

When the government paid pandemic benefits, most low-income people used them to cover very basic needs. More than half used the money to buy groceries and nearly as many for utility bills, said Guillermo Cantor, senior director of applied research at Prosperity Now, a non-profit advocacy group.

Those people are in trouble if benefits end before they have work, and not even a robust rebound will immediately provide all the jobs needed, said Elise Gould, senior economist at the left-leaning Economic Policy Institute.

“Once evictions are allowed again, a lot of people who couldn’t pay the rent are in trouble,” she said. “Recovery is not going to happen in one fell swoop. I can’t imagine that inequality won’t be higher.”

The ranks of the vulnerable are large — and concentrated among generally lower-income workers.

Georgia’s economy in February had 213,600 fewer jobs than before the pandemic, and 86,300 of them in were in leisure and hospitality.

“It’s been a roller-coaster ride — and that goes for everybody I know who’s receiving benefits,” said Adam Neelly, 45, of Athens. “I am not one of the people making more on unemployment than if they were working.”

Before the pandemic, he worked several jobs, the most lucrative for a company that produced events on cruise ships. A return to normal would mean a flood of work, but it’s the meantime that is troublesome, he said. “The debt comes in waves. I have run up and paid off credit cards maybe three times.”

It’s just too soon to predict the direction of inequality, said Ryan Bourne of the libertarian Cato Institute.

The keys to post-pandemic incomes will be consumer and business spending because they determine demand for workers, said Bourne, author of Economics In One Virus. Will consumers’ pandemic habits become permanent? Will businesses keep many employees working from home?

“If the answer is a yes, a lot of low-wage workers will have to re-train, find new jobs, or move, and there will be painful short-term consequences for their incomes,” he said. 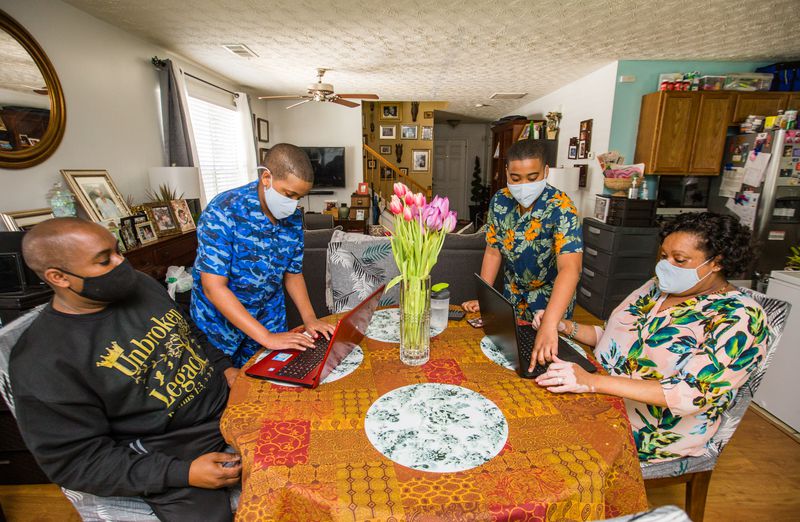 Earl McCarthy, left, and his wife Natasha Pierre McCarthy, seated right, get help from their children Joshua, 12, left, and Aidan, 14, right, setting up laptops Monday, April 5, 2021. Their oldest daughter is away at college. Earl lost his job in sales at the beginning of the pandemic and Natasha, an adjunct professor, had to choose between going back to in-person teaching or staying with her kids who are still schooling from home without the option to go back. (Jenni Girtman for The Atlanta Journal-Constitution)

When the pandemic hit, he was working in sales for a senior living community, his wife was an adjunct professor, and the bills got paid.

Then they lost their jobs. After months of wrangling, McCarthy got unemployment benefits, the family signed up for food assistance and dug into savings. The last year has rewritten plans for their children’s college education and the couple’s retirement.

“The pandemic truly exposed how vulnerable we were,” he said. “The security of having gainful full-time employment with health benefits was snatched way, exposing our worst fears as parents — not being able to provide for your children.”

If they hadn’t lost their jobs, they would have been able to save and “be in a better position overall,” McCarthy said. “This pandemic has done a hard reset.”

*Questions were asked in March.